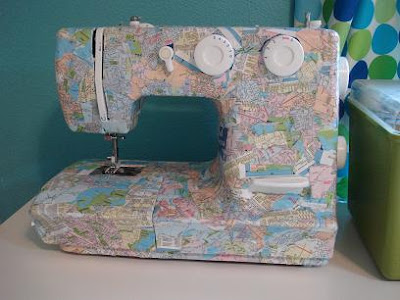 My little ones and I vandalized my first Singer sewing machine this afternoon. The poor old gal doesn't work very well anymore (she's getting moody in her old age) so she was sacrificed for the sake of Mod Podge.

In the new book "The Crafty Chica's Guide to Artful Sewing," Kathy Cano Murillo used buttons to Crafty Chica-fy a sewing machine. Genius! We decided to go a messier route and basically finger painted with glue. BTW, how many washings does it take to get Mod Podge out of a 2 year old's hair? Hmmmm.

Anyone who knows me well knows that as soon as I get a project "bug" I have to get to it RIGHT NOW. After lunch I had phoned the hubby: "Do you have an atlas anywhere?"

"No, I don't think so." Note to self - buy him an atlas for Christmas.

I took an impatient look around my sewing room and a lightbulb went off. Duh - a map of Iowa maybe? I phoned the hubby again: "Do you have a map of Iowa?"

"No, I don't think so. Maybe in the truck?" I know by this point he's probably wondering what in the world he was going to come home to tonight (he knows me well). His fingernails are still stained green from spray-painting a gaudy frame found at the antique mall last weekend. It's now my new bulletin board!

I headed to the truck and found a map in the console, but randomly it was Minnesota. Happily I realized Minnesota will work much better, Minnesota has way more lakes than Iowa so the blues will match my sewing room (did the designer giddy dance). 2nd note to self - buy him a new Minnesota map for Christmas.

The next hour was spent tearing up the map and affixing the pieces to the Singer. Luckily the itty bitty cooperated and stayed sleeping in her bouncer while her older sisters and I gave the machine its mappy makeover.

The old gal is now officially retired, sitting happily next to my beloved Grandma's green sewing box on my craft table.
Posted by Jenny at 5:21 PM 2 comments:

if you spend too much time sewing...

...to have a green thumb, this Prickly Pear Cactus pincushion would be the perfect cheery addition to your sewing room. 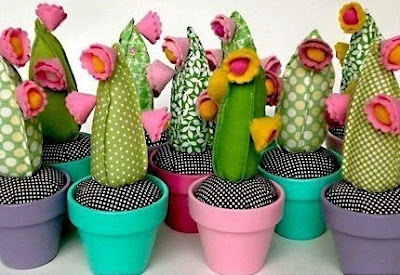 Etsy seller prettylilthings' shop is filled with other equally cute goodies, like the Ship in a Bottle plushie below. 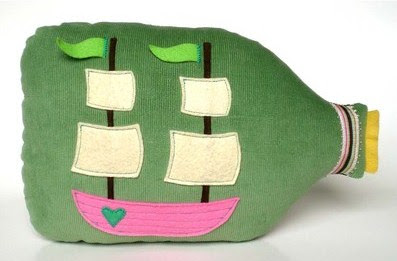 ...eat cupcakes (then carry on) 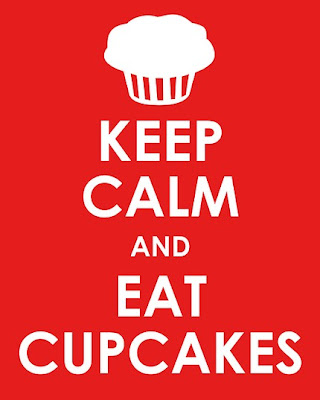 Coming soon to the wall in our dining room, which as of late has become our cupcake decorating studio. Etsy seller The Lobster Pot has lots of other fun modern spins of the 1939 "Keep Calm and Carry On" motivational poster, originally distributed at the beginning of WWII by the British government.
Posted by Jenny at 9:28 AM 1 comment:

I pity the fool (in baby form) 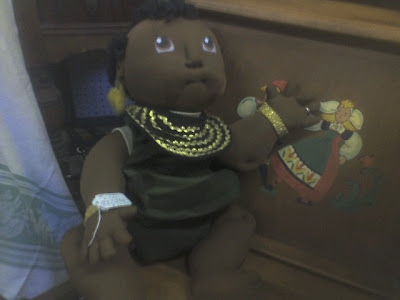 Is this really a baby Mr. T? We were perusing the aisles at our local antique mall when this made me do a triple-take. The price tag reads "cabbage patch doll" and there is a feather hanging from his ear. I didn't have time to check and see if this is a mass-produced or handmade doll as Little Bit #2 tried taking off with Mr. T's benchmate Paddington Bear.

There are some Mr. T patterns out there. And a google search provided this. I'm thinking this baby T might be a OOAK.
Posted by Jenny at 5:44 PM No comments:

why mommies are afraid to shower...

...we have opportunistic 2 year olds.

I am thankful that my kiddos have most recently shown such an interest in art, but I am more thankful that bathtub crayons wipe right off of new dressers as well as off of bathtubs.

A long time ago I picked up some silver sharpies at Lowes for writing on Christmas presents. They didn't have a clip on the cap, and randomly turned out to be the perfect tool in turning out corners while I was sewing. So they have become a staple at my sewing table. I didn't have a clue that they still worked, so imagine my surprise when I found this other opportunity seized yesterday: 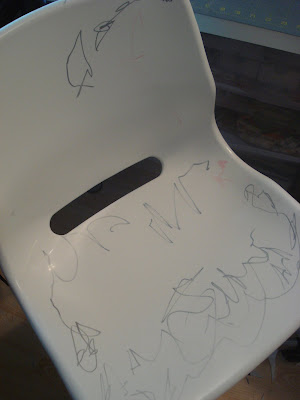 My sewing table is no longer on the list for acceptable hiding spots during a game of hide n seek. ;)

The hubby said he can take it off with acetone, but after a day of living with it it's kind of growing on me. Graffiti art, toddler-style!
Posted by Jenny at 9:45 AM 2 comments:

Take a peek at where your favorite Etsy peeps get their craft on: http://www.flickr.com/groups/etsyopenstudios

Also fun to browse: http://www.flickr.com/groups/theresnoplacelikehere/pool
Posted by Jenny at 3:40 PM No comments:

this is WOW good, it's our new favorite

Directions: In a large saucepan, combine 1 cup sugar, cornstarch and salt. Stir in pineapple until blended. Bring to a boil; cook and stir for 2 minutes or until thickened. Remove from the heat. Gradually stir 1 cup hot filling into egg yolks; return all to the pan, stirring constantly. Bring to a gentle boil; cook and stir for 2 minutes. Remove from the heat; stir in lemon juice. Keep warm.

For meringue, in a bowl, beat egg whites and cream of tartar on medium speed until soft peaks form. Gradually beat in remaining sugar, 1 tablespoon at a time, on high until stiff peaks form. Pour hot filling into pastry shell. Spread meringue over hot filling, sealing edges to crust.

Bake at 350° for 15 minutes or until meringue is golden brown. Cool on a wire rack for 1 hour; refrigerate for at least 3 hours before cutting. Refrigerate leftovers.

I ordered this shirt last year on Etsy from ahpeele but only got to wear it once or twice. It's finally nice enough to wear it again! It reminds me of the pirate ship tattoo a gal named Bianca got on an early episode of Miami Ink. 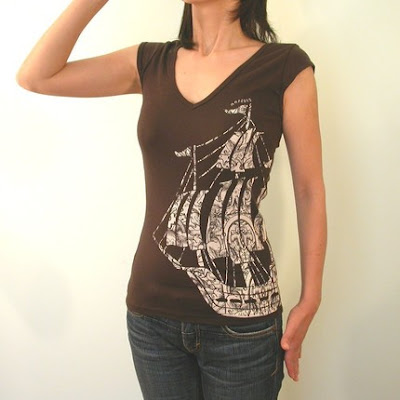