A few weeks ago I told my neighbor I was planning on making pickles from the cucumbers in the garden, and bless her heart if she didn't bring me 2 huge bags of cukes from her garden last week. So now I pretty much had no choice but to walk the walk and not just talk the talk of canning.

I found a recipe for Janice Pike's Perfect Pickles in my go-to cookbook (Fannie Farmer: one of the most practical/favorite gifts ever from my momma...I had no idea that Christmas just how often I'd use it). We made a quick trip to the grocery store, made an executive decision to go with one large Walla Walla sweet onion vs. 18 small white onions (still anti-onion since childhood unless they're breaded and fried) and went with apple cider vinegar vs. regular cider vinegar.

Cucumber-cutting commenced and continued for the next hour or so while baby slept and the girls played in pool/hubby played in dirt outside. I cut some into spears and some into slices. 3 red bell peppers and 3 green bell peppers also had to be cut up - and when hubby saw the massive amount on the cutting board his eyes bulged out. At this point I was having some self-doubt about the outcome of this recipe, but since I had spent so much money on the dadgum peppers I was committed to using them. All the veggies had to be covered with 2 trays of ice cubes and coarse salt to stand for 3 hours. Enough to fill 3 of my huge pots. Now I was asking myself how I was going to keep the jars hot (answer - dishwasher) and get the waterbath going in another pot to process the pickles (answer - husband went to the store to get 2 gigantic canning pots thank goodness) if all of my big pots were being used just to cook the pickles.

After 3 hours they needed to be rinsed, drained, rinsed again, and then cooked to a boil with the additional ingredients. He filled the jars, I put on the lids/bands and he stuck them in the canning pots to process. He likes to take-over certain parts of projects where I might burn or harm myself, and I am thankful for this. 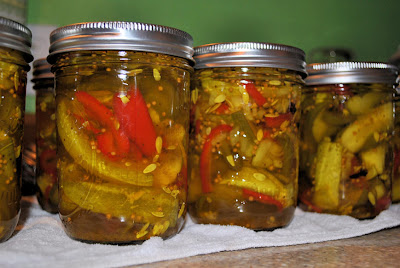 But the end result - SUCCESS! After 24 hours they're all sealed perfectly, and the pickles seriously live up to the name of the recipe. I was actually surprised at how good they are - even our 6 year old couldn't stop eating them. Not too shabby for a first attempt at pickles - let alone first attempt at canning!
Posted by Jenny at 10:15 AM