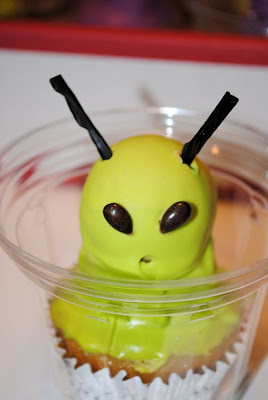 We got the alien idea from our Hello, Cupcake! book, and they are also the October picture for the Hello, Cupcake! 2010 wall calender. :) So we've been staring at the aliens in our kitchen for the entire month of October. 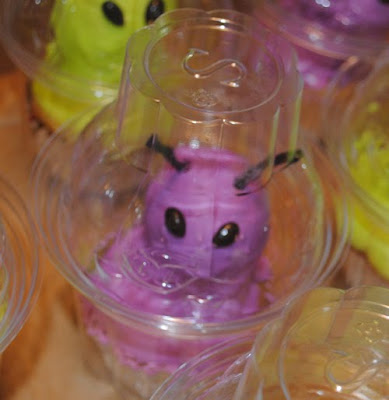 While I was assembling the marshmallow and donut holes for the purple aliens, I had a flashback to childhood and watching the Fragglerock episode with gorg butter. Does anyone else remember this? I tried explaining it to my sister last night to no avail. :) I told her to bust out the Fragglerock DVD that our parents gave us (er...I mean the kids) for Christmas last year.

You can also find instructions for the cupcakes on the Duncan Hines website here. They are made up of a vanilla cupcake (or funfetti of course - aliens have to be cool on the inside too, right?), half a marshmallow and a plain donut hole on top. We were able to find the chocolate covered sunflower seeds online for the eyes, and cut up black licorice twists for the antennaes.

Our local DQ sold me the "spaceship" sundae cups.
Posted by Jenny at 9:20 AM